While we were in NYC last weekend visiting my bestie Charlotte (more on the trip in a later post), we ate at some YUMMY restaurants, so I had to share my faves! Coincidentally, both were Italian.

Restaurant #1:: Adrienne’s Pizza Bar in the Financial District
We walked to dinner after we got in town on Friday night, which I just love. We can’t walk anywhere from our house in Smyrna, so walking to eat is sort of refreshing, especially when I’m planning on pigging out on pizza and bread and wine…. The restaurant is located on the cutest cobblestone pedestrian street. As soon as we turned onto the street, I felt like we’d been transported to Europe. The rows and rows of outdoor tables were filled to the brim, even though it was hot hot hot. What a perfect way to kick off the weekend with friends or family. 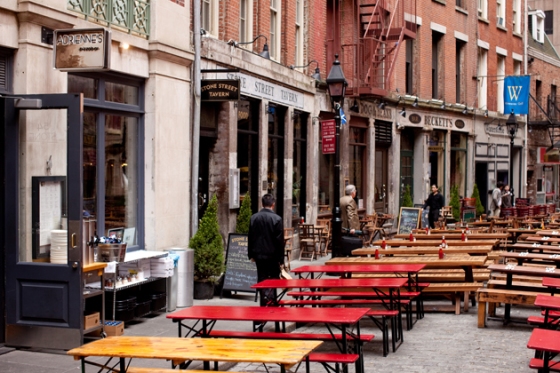 Some of Charlotte’s friends met us for dinner, and we shared a couple of the traditional rectangular pies that I sense they’re known for. Char and her friend Erin immediately insisted on the “pepps and mush” pizza…. I had no idea what sort of special pizza that was until I realized it was just their shorthand for pepperoni and mushrooms. Should have known with Char and her abbreviations. Anyway, we tried that, a veggie, and a pepps and pepps (my own version with pepperoni and bell peppers). The pizza was so so tasty — just the right amount of dough and crunch and spice. We also had hot bread to dip in olive oil, caesar salad, and caprese salad (Craig’s new fave). Everything was perfectly delicious. The restaurant was really hot, but we were also sitting right by the kitchen. Char claims it’s the best pizza in NY, and I am sure there could be a debate about that for days, but I’ll take her word for it. 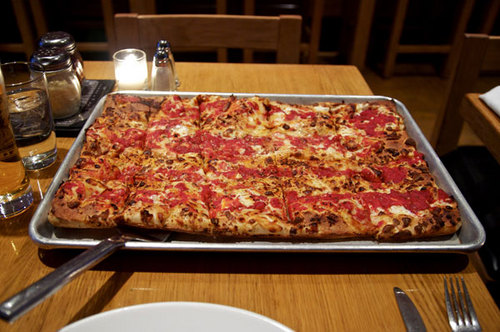 Restaurant #2:: La Bottega at the Maritime Hotel
Saturday night, we had reservations here for one of Charlotte’s friend’s birthdays. It was such a neat place! I love dining al fresco, and this place felt like we were eating in a big park in the middle of Chelsea.

How fun is this arial shot of the umbrellas on their patio?

And the Chinese lanterns… so festive! 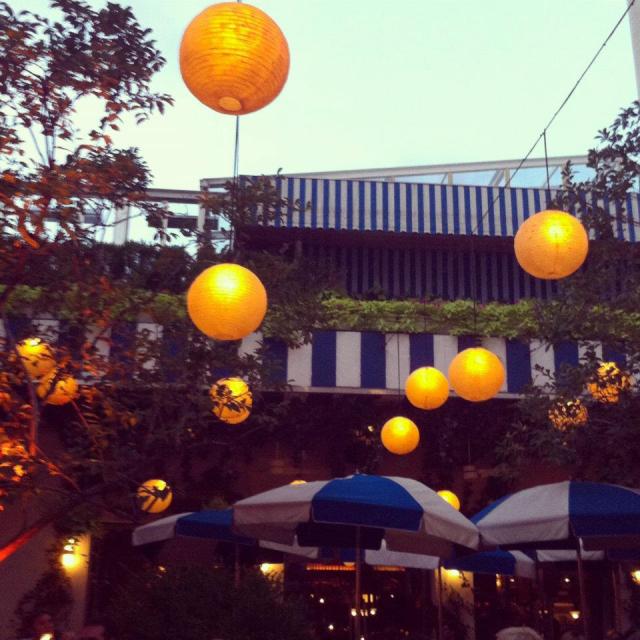 We started the meal with some hot-out-of-the-oven pizza dough dipped in olive oil… mmmmm. Charlotte tried the watermelon and watercress salad (below) and I got the Tri Colore salad (hers was better and much more interesting). Craig got the farro salad (which is a grain) with mozzarella and orange segments. It was more filling than I’d want for a salad/appetizer, but it was interesting to try. 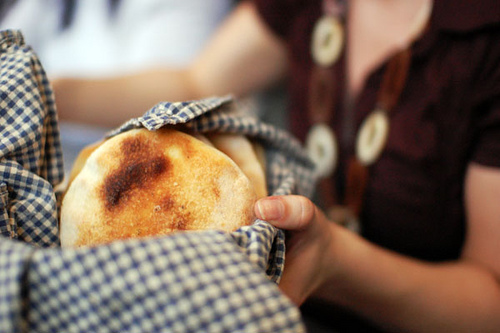 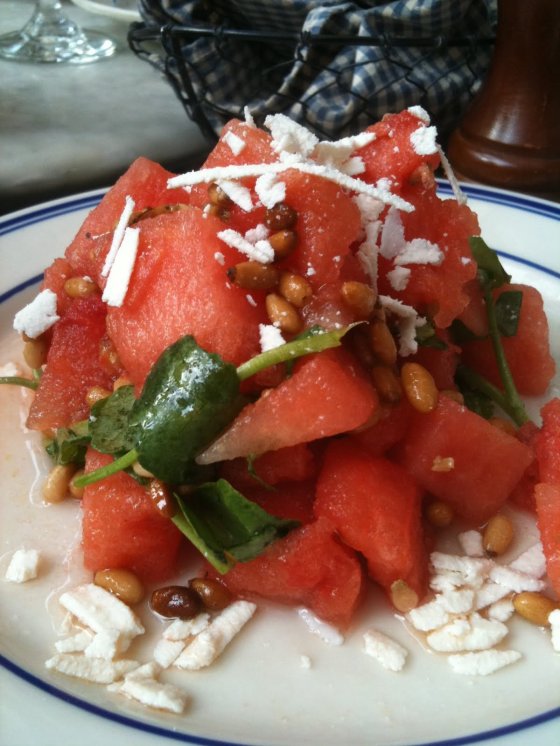 A big plate of the Burrata Caprese was passed around the table as well. I wasn’t a huge fan of the watery texture inside the mozzarella ball, but it seemed to be pretty popular with everyone else. 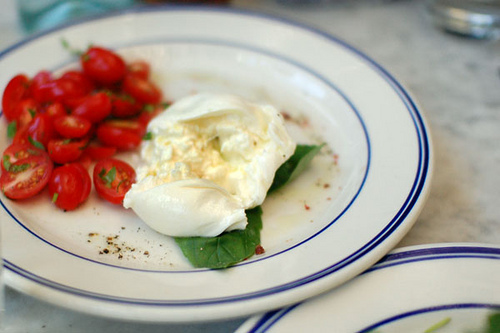 I stuck with one of my new faves for the entree — Tagliatelle alla Bolognes (basically pasta with a bunch of meat sauce) and it was good. I ate most of it, despite having eaten all day.  Craig chose the artichoke and goat cheese ravioli, which were HUGE and green and tasty-looking. We had a large group and shared several pitchers of the white sangria, which was filled with fresh fruit. So refreshing on such a hot, humid night!

We went to a number of other restaurants while in the city, but these were my faves. I can’t wait to go back and try more. What are your favorites in the big city?

One thought on “2 NYC restaurant reviews:: adrienne’s and la bottega”