We celebrated my 29th birthday a little early last Thursday night with my brother and soon-to-be sister-in-law. I’ve been dying to go back to The Iberian Pig since we first tried it in May, so that was my #1 choice for my birthday dinner. The restaurant is located in the charming Decatur Square and is mixed in with a variety of great little restaurants, bars, cafes, and shops.

What does The Iberian Pig mean? Well, according to their website, “The Black-footed Iberian Pigs that roam Spain create some of the most sought after cured meat in the world, Jamon Iberico. Only recently imported into the United States, we are one of the select few restaurants in the country that serves the acorn fed Iberico ham from Spain. To preserve the integrity of Jamon Iberico, we slice the ham in view of our guests on a imported mechanical proscuitto slicer from Italy.” So now you know.

Their menu is largely tapas-style, but they also offer entrees. Both times we’ve vistied we’ve chosen mostly tapas so we could try more options — it’s my favorite way to eat a meal. We joked that our waitress probably thought we hadn’t eaten in days because of how quickly we enhaled each dish…

The B.W.D. and the Spanish Tortoloni are my two current favorite dishes. What are B.W.D.s, you ask? Bacon Wrapped Dates, of course! It’s a magnificat combination of sweet and salty and BACON — what’s not to love? And the Tortoloni is filled with “drunken” goat cheese and is gooey and delicious — just watch out for oozing cheese/oil. I almost had a catastrophe with that oil and my shirt last time.

Pork Cheek Tacos and the Carne de Cerdo flatbread are also a must if you like pork — but I’d think that given their name, most anything with pork is fantastic there. (Although I was NOT a fan of the pork belly…. way too slimy for me.) Lauren also got the Eggplant Rellenas — eggplant dressed with goat cheese, caramelized onions and corn salsa — and it was definitely a crowd-pleaser. 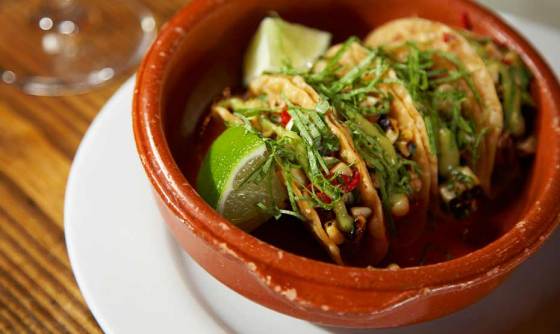 For dessert, we ordered the House-made Churros with cinnamon-chili infused chocolate sauce, but they were greasier than I remember and just so-so. The dessert star was the Dulce di Leche gelato topped with fresh raspberries — I could have eaten several more servings of that! And our complimentary prosecco was the cherry on top of my yummy birthday dinner!