Last weekend, we tried out the newest BBQ hotspot in town, Bone Lick BBQ, over in West Midtown.  According to their website, Bone Lick started as a pop-up restaurant concept by Executive Chef Mike LaSage at P’cheen in the Old Fourth Ward. I’ve visited P’cheen once and it was fabulous, so this makes sense now.  Atlanta Magazine named it #4 in the state and #1 in metro Atlanta. And right now, they are offering a Scoutmob deal for free boiled peanuts when you dine in!

The restaurant is on Huff Road in between Howell Mill and South Atlanta… sort of an off-the-beaten-path location in my opinion, but it’s definitely worth checking out.  Their menu is crazy with lots of funny menu item titles. We couldn’t resist “Them Big Ole Totties” — a heaping mound of tater tots smothered in sausage, pulled pork (delicious and smoky), jalapenos (firey), chipotle bbq sauce, and homemade cheese sauce (even better). I also enjoy that you can get “just one rib” on the appetizer menu. Beware, though — they say that much of their menu is on the spicy side, and they’re not joking. 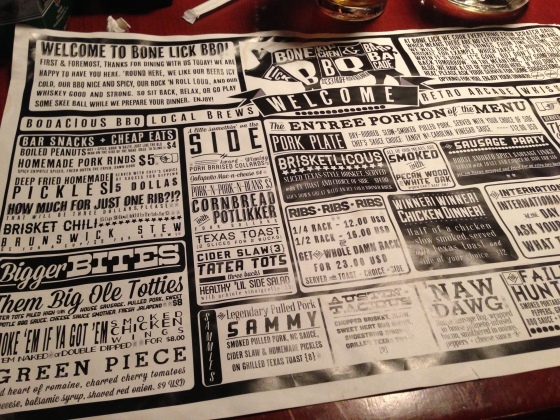 How could we resist this? 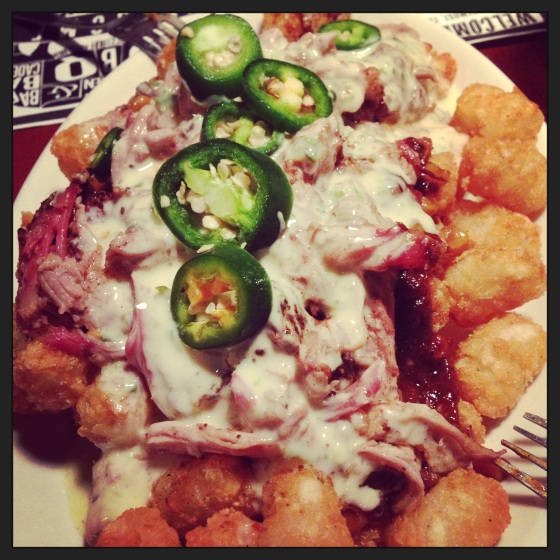 They offer lots of entree and sammy choices… one name in particular that I enjoyed was “The Failed Hunter”… vegetarian, of course. We are far from vegetarians, so we did not sample that one. Craig chose the combo meat plate with brisket and pulled pork (and pork braised collards), and I went for the 1/4 rack of spare ribs, which were one of the waiter’s faves. I also couldn’t resist the jalapeno mac n cheese. Both of our meals were spicy but so, so good. It seemed like a TON of food… especially after eating 10,000 tater tots for an appetizer, so we had plenty of leftovers to take home. (yay!) 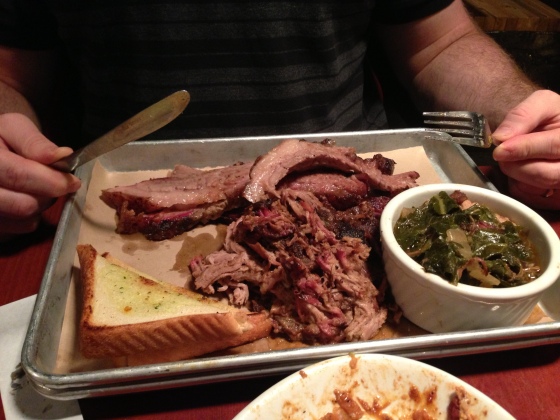 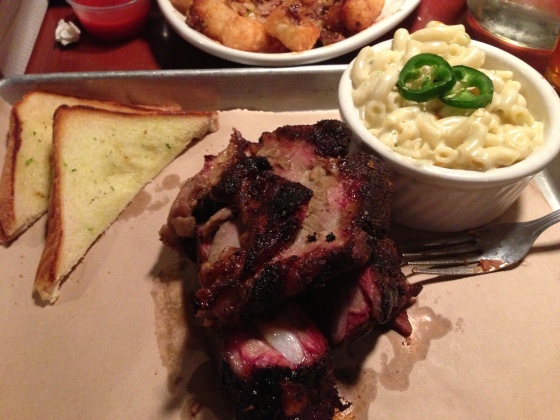 I was reading through their website while writing this, and saw mention of House Cotton Candy and Funnel Cakes…. WHAT?! I may have been stuffed to the brim, but how did my waiter let me miss out on that?? I’ll be back very soon — maybe just for tots and dessert. Oh — and they have skee ball!!! 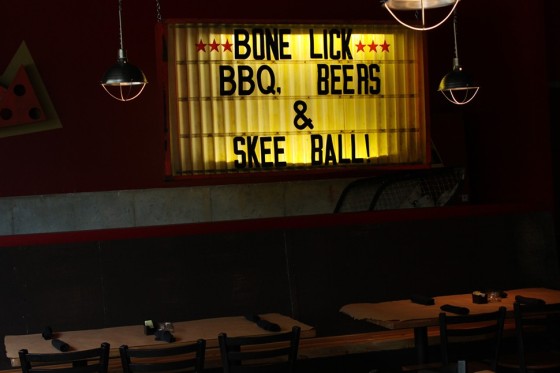