Milestones: Just a couple days after hitting 8 months, Leighton got her first tooth!! She’s been drooling and chewing on anything she could get her hands on for a long time now, so we weren’t sure when she’d actually get a tooth in. My mom spotted it while babysitting her one night, and by the next day, she had a 2nd one right next to it. Thankfully, she’s taken it really well so far. And her now tiny toothy grin is seriously to die for. 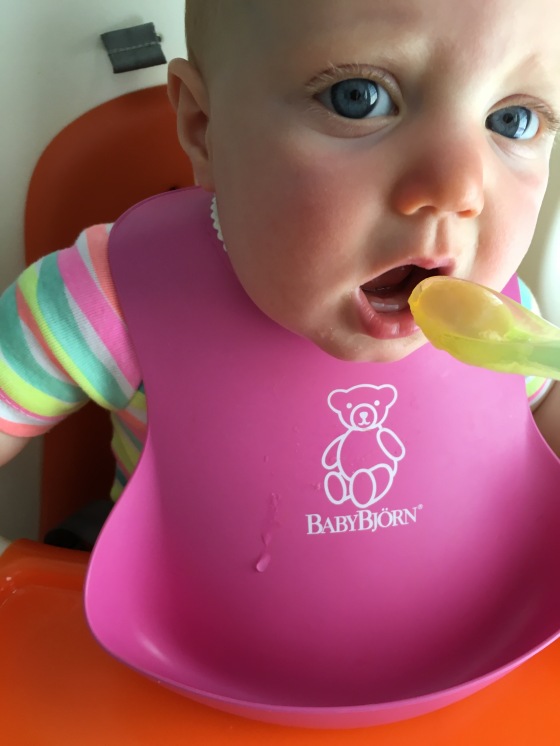 She hasn’t quite mastered her first word yet, but I have a feeling that when she does, it’s going to be “dada”! She’s started saying a string of “da-da-da-da-da” all day long, and it’s the cutest little sound I’ve ever heard.

I think her next big milestone is going to be walking any time now. She’s started doing laps around the coffee table and is taking her hands off to stand by herself for a few seconds before falling onto her bottom. Then she’ll crawl over to a piece of furniture to climb right back up to standing position and do it all over again.

Likes: One of her favorite activities is standing along the railing of her crib, holding on with both hands, and bouncing like crazy. I joke that she’s jumping on the bed, and I think she would do it for hours if she could keep from occasionally falling over. She absolutely loves standing up on her own and walking along the railing — and she likes it so much, she’s been waking up some in the middle of the night or really early in the morning to practice… so fun for all involved! Hopefully this is just another one of those phases that will quickly pass. 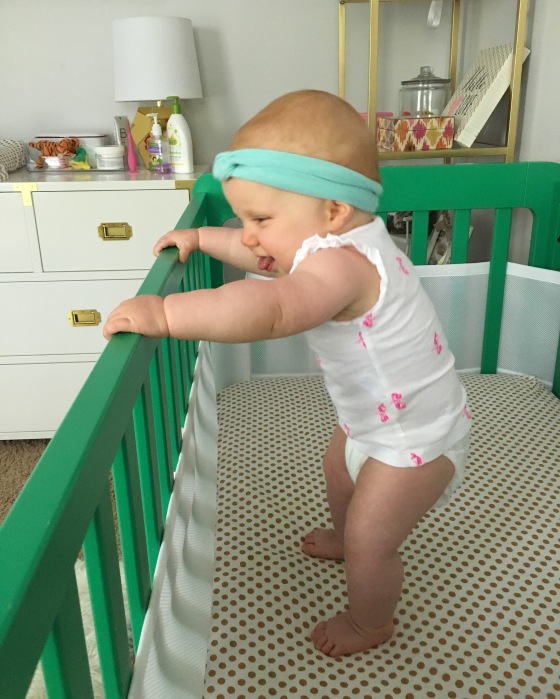 She’s more obsessed with Coco than ever! When my mom babysits, they like to sit on the floor by Coco’s bed so that Leighton can hand Coco toys to play with. She’ll laugh hysterically, which is more like a cackle with her raspy little voice,  and then try to take the toy away or eat it herself. Coco is so incredibly patient and gentle with her. 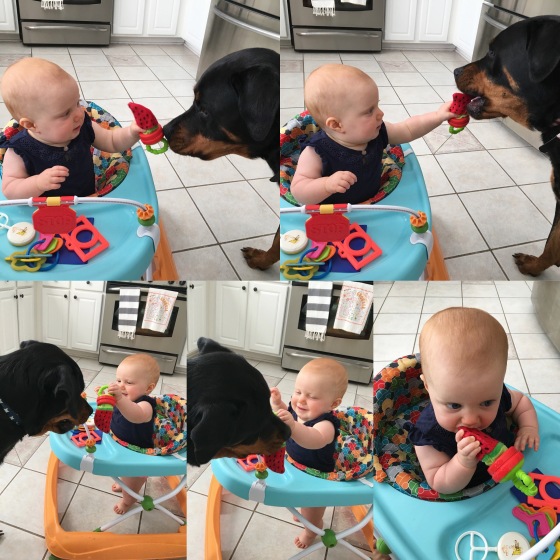 Dislikes: She still seriously dislikes being strapped into… pretty much anything. Her car seat and strollers are the most offensive, and I think it’s because of the shoulder straps. She also does not appreciate being laid down to have her diaper changed. Girl doesn’t like to be held down!

Fun stuff  & firsts: Leighton is learning how to wave! She holds her arm up in the air and sort of waves her little hand while smiling like crazy. 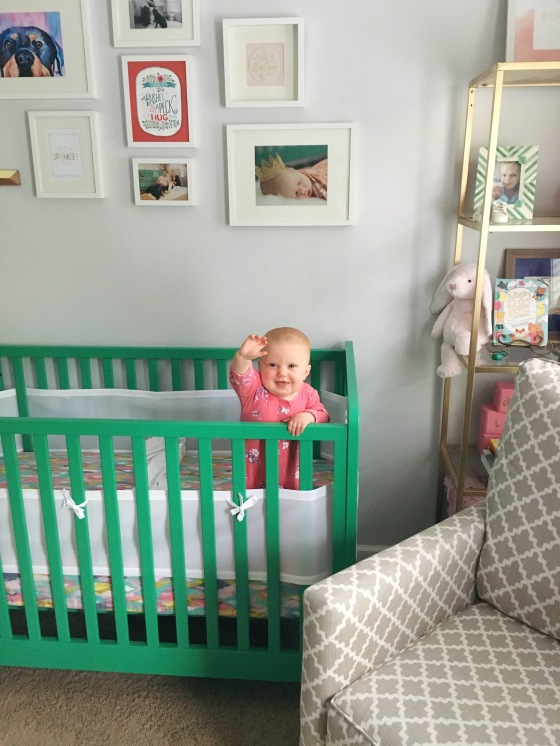 She regularly sleeps from about 7:15/7:30pm – 6:30/6:45am, which has been a game changer! She’s still a bit iffy on taking good naps, but she does at least go down twice a day. Morning naps are around 2 hours after she wakes up and are super short – more like a cat nap. Her afternoon naps can be anywhere from 30 minutes to two hours (if I’m very, very lucky). She’s just a busy girl with too many things to do… no time for napping!

She’s wearing mostly 9-12 month clothes and size 3 diapers. She drinks out of her sippy cup like a champ. We’re now working on how to set it down nicely rather than throwing it across the room or simply letting it fall to the floor when she’s done with it. 😉 One thing at a time…

Over Memorial Day weekend, the pool was finally warm enough for Leighton’s first trip! She hung out for about an hour and a half with some of our friends and their kids, and she was so calm, just taking it all in. She liked her baby float, and at one point, she was laid back “reading” her waterproof book. We took her back the next day, and I’m excited to spend many more summer days with her at our pool this year! 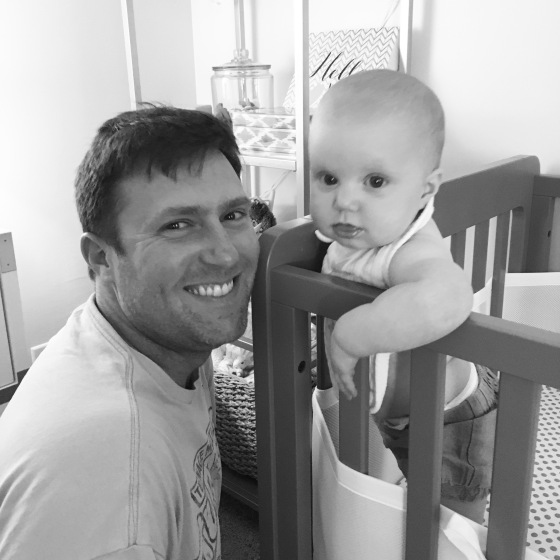 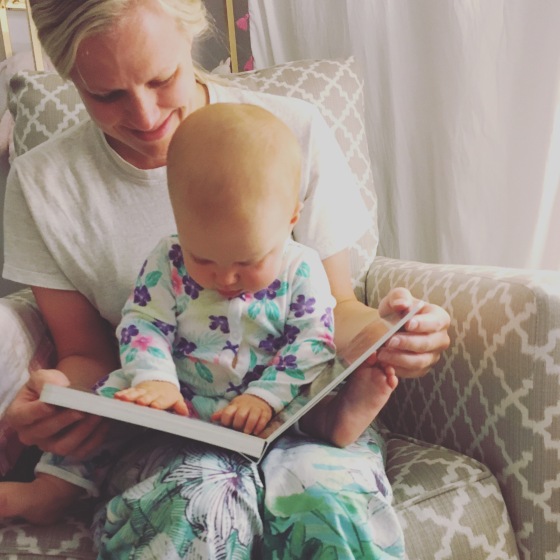 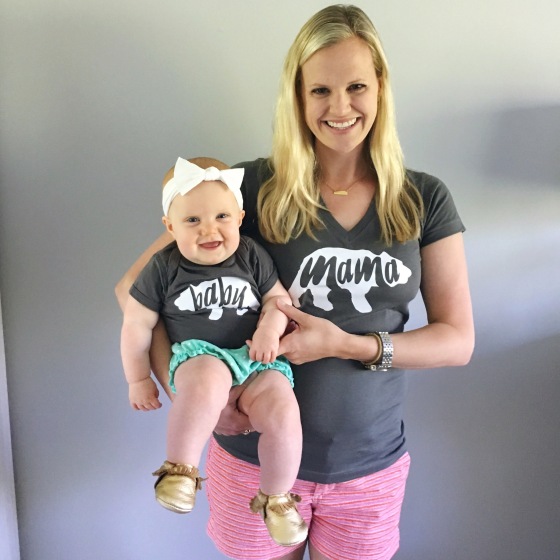 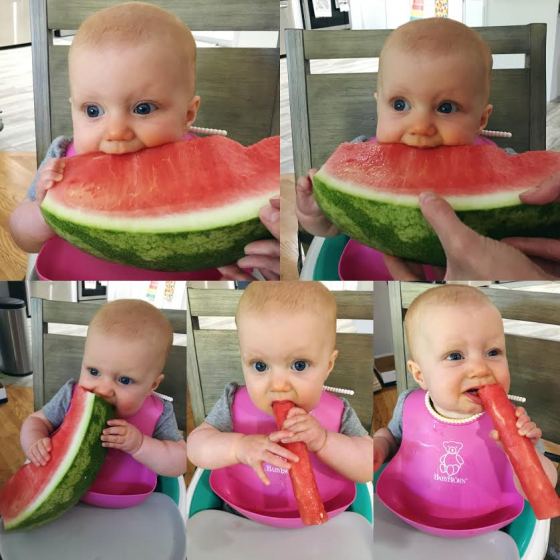 Leighton is really into investigating everything she can get her hands into, and she’s learning more every day. She’s currently pretty fearless, which is both fun to watch and also a little terrifying. Her determination with everything she does is amazing, and I’m constantly blown away by the new things she’s learning and figuring out. I love waking up to her as my alarm clock every day (even if it’s sometimes obscenely early) and I love getting to rock her to sleep every night. This age/phase is definitely the most fun one yet. I just love my best little friend.