When Craig asked what I wanted for my birthday this year, I asked for an experience instead of tangible gifts. He happily agreed to my idea of doing an overnight staycation in Atlanta, so he booked a room at the Intercontinental Buckhead, and I got to planning. (Of course I wanted to plan my own birthday outing, right?)

My amazing mom kept Leighton for the day and night so we could have a fun little mid-week getaway all to ourselves. We started the staycation off with a walk on the Beltline and took a break for lunch at Ladybird Grove & Mess Hall — somewhere that we’d yet to make it to, but that has been on my list for quite a while. It did not disappoint! We shared the fried pickles (the basket included fried red peppers, which were our favorite) and a couple beers along with our sandwiches. He had the Torta Cubano and I had the Spatchock Chicken Melt – both were super filling and tasty. The decor inside is like a campfire mixed with a lodge with a big screened porch and tons of outdoor seating to enjoy the Beltline. I can’t wait to go back! 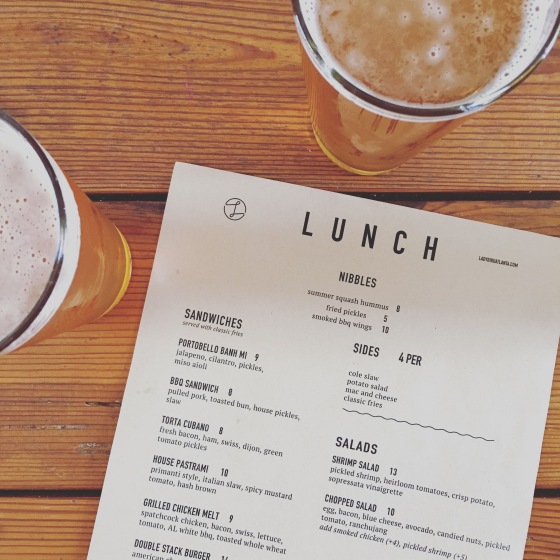 We wandered around Krog St Market (and may have made a stop by Little Tart Bakeshop) and then walked the Beltline back to Ponce City Market to kill some time until Skyline Park (the Coney Island-style rooftop park) opened for the afternoon.

Skee-ball is one of my favorite games ever — it totally makes me feel like a kid again! So we of course got a few rounds in, and it was so nice being there on a weekday because we practically had the place to ourselves. We won a little plush duckie for Leighton, which was so fitting, as she just started saying “dut” (for her rubber ducks) this week!

We also rode the Heege Tower, which is so not scary like it looks, and it gives an even better, 360 degree view of the Atlanta skyline. 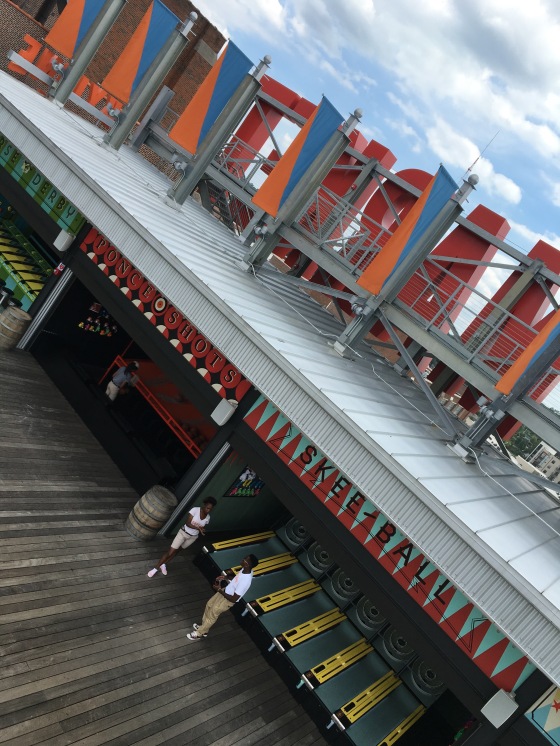 Another perk of being there on a rather empty day… we beat the bartender there, so the manager treated us to samples of a few of their most popular drinks! They included 2 frozen options, which were yummy and so refreshing on such a hot day. 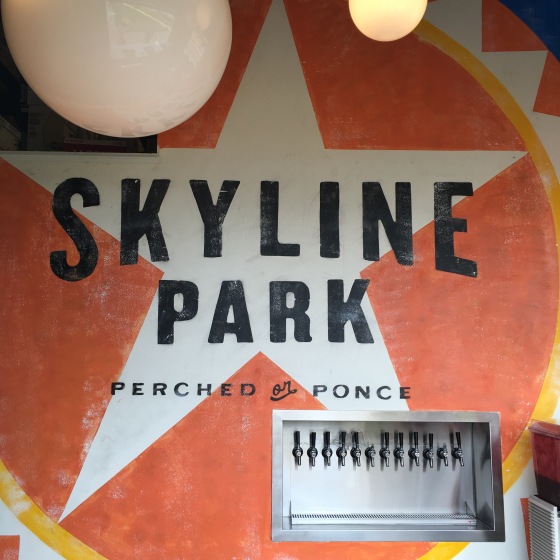 We finished up with a friendly game of putt putt… I can’t even remember the last time I played this game. It was a little tricky, so that’s what I’ll blame my loss on…. 🙂 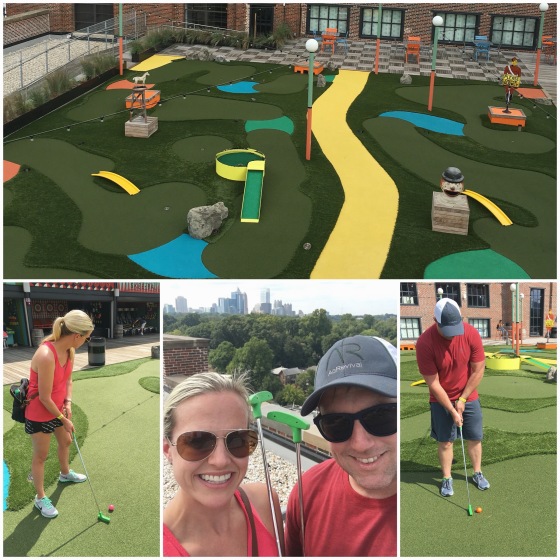 Ah…. so nice to check into a hotel (or house/wherever we’re staying) and not have to haul half of our house in with us! Our room had the prettiest view of so, so many trees and Stone Mountain in the distance! We spent a little late afternoon time at the pool, helped ourselves to the complimentary lounge bar and snacks, and came back to the room to find a birthday cake and balloons from the hotel! Nicely done. 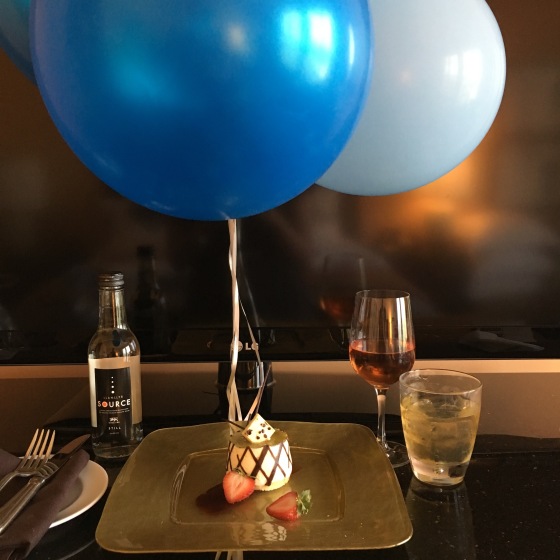 We capped off the most amazing day with a wonderful birthday dinner at Aria in Buckhead. The atmosphere is dark and romantic, and the food was delightful. I loved my beef short ribs, and Craig loved his scallop dish. Even though I’d already had the best peanut butter cookie at the hotel earlier (and a couple bites of that birthday cake), I couldn’t resist the warm caramel and chocolate cake for dessert. 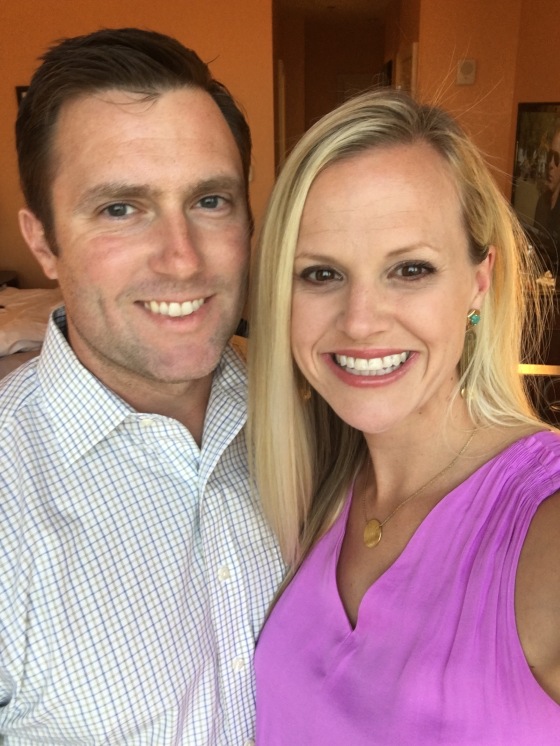 Despite originally wanting to sleep in on this staycation, I ended up booking a tour with Bicycle Tours of Atlanta for the next morning, and I am so glad I did! Waking up early was not welcomed, but once we got going on our bike tour with the owner, Robyn, I think we were both happy we decided not to be totally lazy instead. 🙂 We rode for 3 hours and covered about 8 miles on part of the Beltline and through the neighborhoods of Inman Park, Candler Park, Old Fourth Ward, Little 5 Points, and more. It was such a cool way to see the city!

Robyn was kind enough to offer a discount code for my blog readers! Use code: MELISSA to receive 15% off any future tour booked by Labor Day (9/5/16). I’m going to share more photos and tidbits we learned in a dedicated post, so check that out soon!

We had the best 24 hour staycation. It was just what I wanted and just what we needed. A little relaxation, a lot of fun adventures, and some solid time for just the two of us. Best of all, we didn’t even have to go far to do that! Our city is filled with so much to do, and I have a new appreciation for the greatness that is the “staycation.” Before it was even over, we decided this needs to become a regular thing. A big thank you to Craig for treating me to an amazing birthday gift of adventure, great food, and time together!