Just in the nick of time, we made it to the beach before the end of summer. My all-time favorite place is St. Augustine, FL, as you may well know if you know me or have been reading here for long. We took several friends down for a long weekend at my grandmother’s beach house, which is where I grew up vacationing. Being there brings back so many wonderful memories of a lifetime of beach trips with family and friends, and I’m so happy we made it back again this year.

We went down mid-week so that we’d have time to hop over to Jacksonville to visit my grandmother.  She treated us and my cousin to a lovely lunch at her country club, and then we headed back to the beach to soak up a couple hours in the sun. We got to eat at some of our favorite local restaurants and have drinks at the Tini Martini Bar, which has a fantastic view of sailboats and the Bridge of Lions – especially at sunset! The majority of our trip was spent laughing, lounging on the beach, and just enjoying the company of some of our dearest friends. Can’t go wrong with that combo.

I don’t think many more words are needed, but be prepared for a photo over-share of our beach-y good time!

Yes, that is a SHARK that joined the beach party! We think he was about 4-5′ long and was less than 10 yards from the shore. He popped up a couple times one afternoon, and thankfully we never saw him again.

This is the face I get when I’ve taken one too many photos.

Dinner at our favorite spot, Columbia 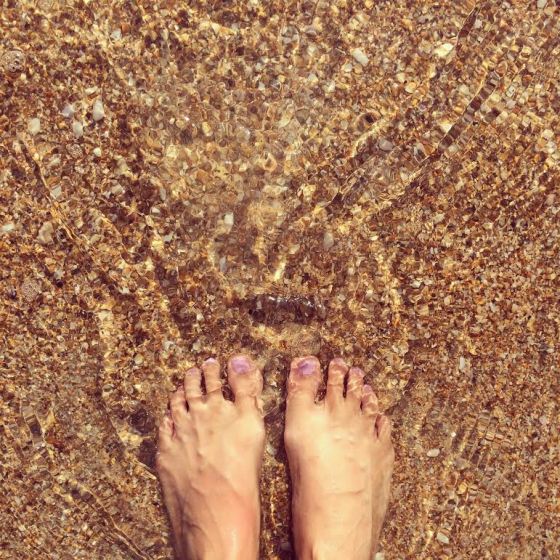 …and if only every evening could end with this view.

Cap’s on the Water

As I’ve mentioned in a couple of my last posts, we took a vacation to St. Augustine, FL last weekend in celebration of our 4th anniversary. St. Augustine is one of my most favorite places in the world. My mom’s family has had a beach house there for over 30 years, and I grew up going there every year. We have so many cherished memories of spending time there with our family and friends. And one of the very best memories is having gotten married there on 6.6.09! I love the historic downtown and cobblestone streets, great seafood restaurants and funny biker bars, private beach and orange sand covered in colorful tiny shells, and really just everything about the area. So what better way to celebrate than bring 8 friends and a baby with us for the long weekend?

The trip started off a little rocky with crazy rain all the way to FL from the impending tropical storm Andrea. When we got to the beach house, the waves were some of the craziest I’ve ever seen there, and the tide was almost up to the walkway. I was more than nervous that we’d all be spending our trip cooped up inside, but the sun miraculously came out on Friday morning and saved the trip. So we stocked up on lots of food and drinks to entertain ourselves with for a few days of uninterrupted beach time bliss. 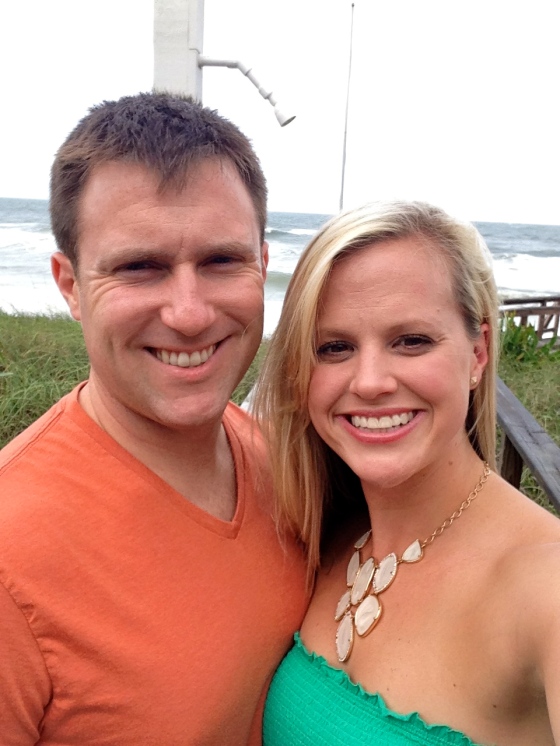 Craig and I arrived earlier than everyone else on Thursday so that we could celebrate with dinner at The Columbia, our favorite spot downtown. There are several locations throughout Florida, but we’ve made a tradition of eating there every time we visit. Their white sangria made tableside, cuban bread, and Chicken Salteado dish are my absolute favorites.

Our morning view from the back deck. Doesn’t get much better than this. 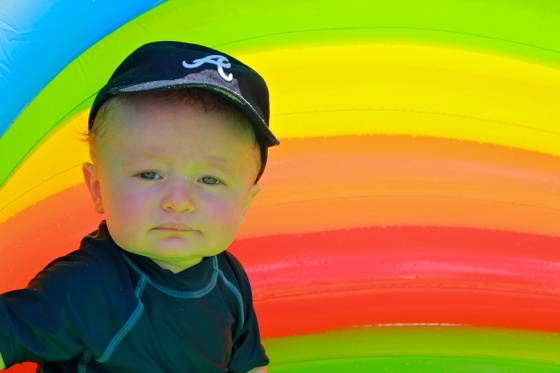 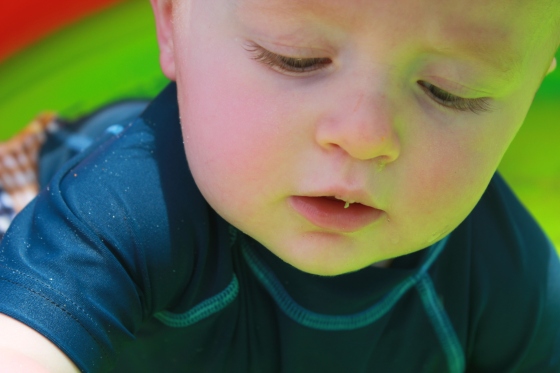 I think the guys really wanted to hang out in his pool with him. 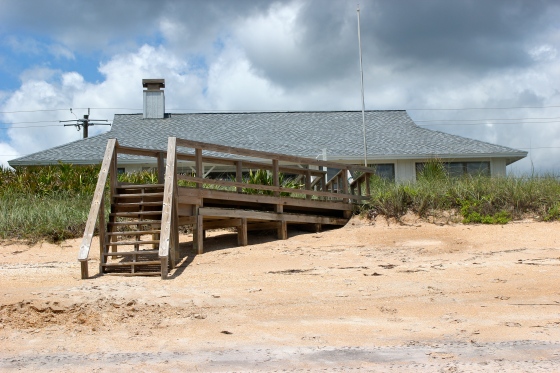 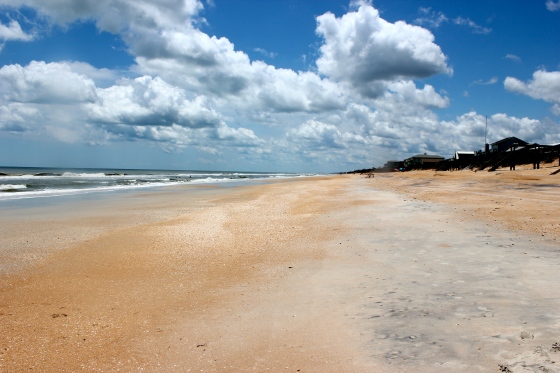 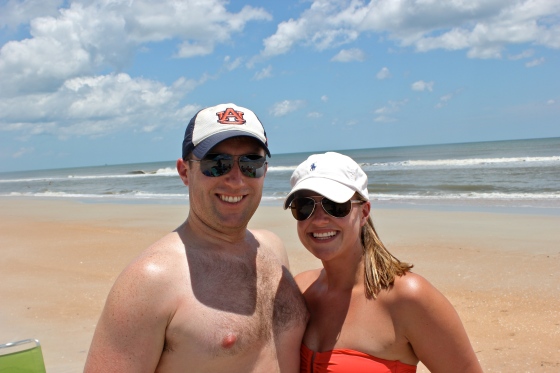 The boys found the toys.

Such a beautiful little face!

Dining on the deck at Cap’s on the Water. Oysters, fried gator tail, tasty cocktails, fantastic weather, sunset watching, and swordfish that wasn’t on the menu. Such a fun night. 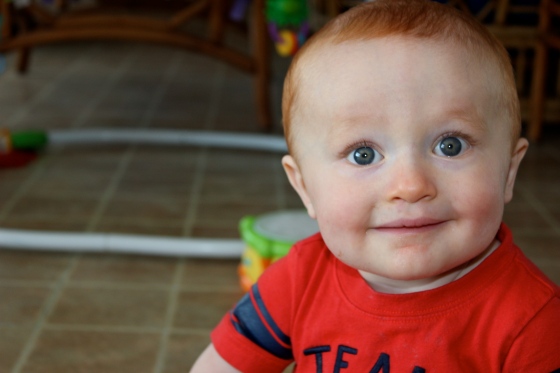 The last night called for a homecooked seafood feast — sausage/shrimp app,
grouper, mahi, swordfish, grilled corn, and salad — all prepared by the guys.
Best meal of the trip!

Last weekend flew by way too quickly, but I guess that’s what happens when you’re having a great time, right? We couldn’t have asked for better weather, more laughs from playing late night games, better food, or more fun. I’m so happy we got to spend our anniversary weekend with some of our favorite friends. Till next time! 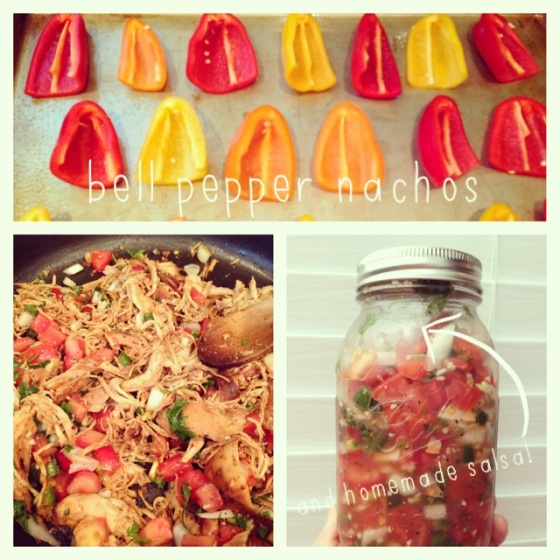 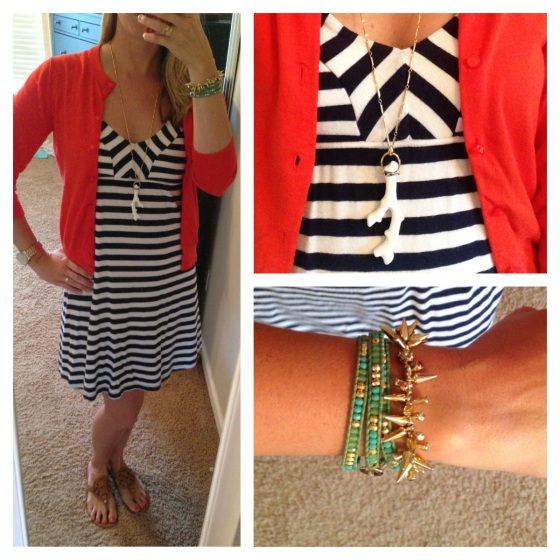 What a week… it started off with a Stella & Dot team meeting with some of my favorite ladies and a picnic in the park for Smyrna Food Truck Tuesdays. This is the first time we’ve been this summer, and it was so much fun. We took a cooler and some folding chairs and set up a little picnic area with several friends (and a couple of their kiddies). The truck lines were HUGE and the air was more than hot, but it was a fun way to spend a Tuesday after work. I chose the coconut fried chicken fingers with sweet rice from Ibiza Bites, and I loved it. Can’t wait to go back!

This week was extra special because June 6th marked our 4-year wedding anniversary! Yippee — we made it! We celebrated with a trip down to my mom’s family beach house in St. Augustine, which is where we got married (in this city, not at the house). It’s one of my most favorite places in the world, so it deserves a dedicated post later this week. We had a fabulous trip with several friends who joined us for the weekend. It’ll be hard to top last weekend, but I’m looking forward to this week’s fun as well!

Four years ago today, I married my best friend. How has it already been that long? Sometimes, it seems like yesterday.  I’m not going to claim that my husband is better than everyone else’s husbands, because quite frankly, that’s kind of rude. But he is the best husband I could have ever asked for, and I love him more and more every day. Instead of a long, sappy post that only he would appreciate (hopefully he would!), here are some of my favorite memories of our adventures over the years. And to celebrate our 4th anniversary, we’re off to the family beach house in St. Augustine (where we made it official) for the long weekend with some friends!

It all started in the summer of ’05. We were such babies then:: 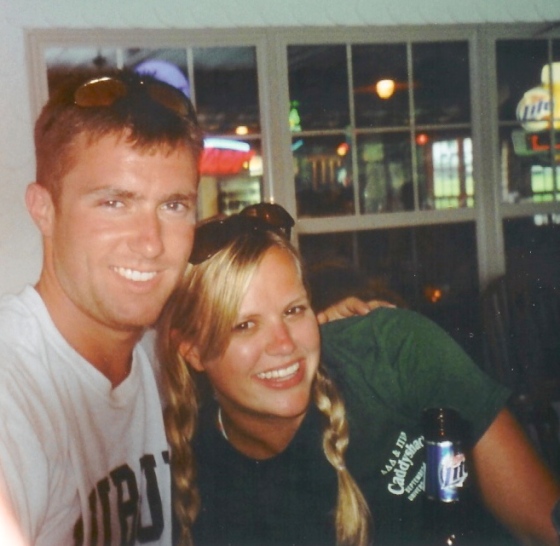 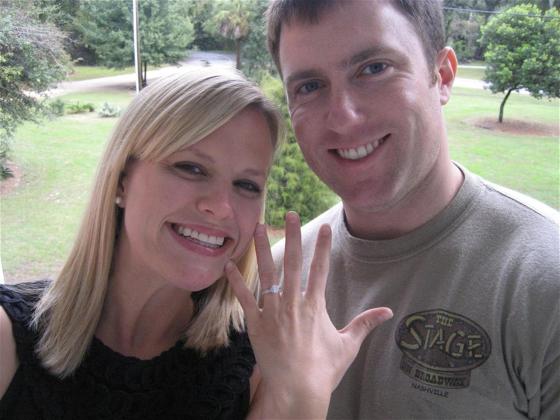 And 7 months after that, we were married in St. Augustine, one of my favorite places in the world:: 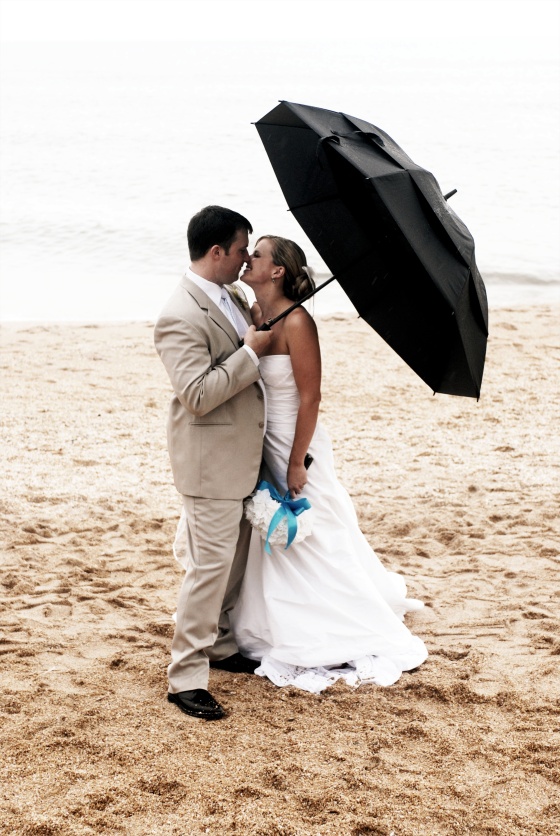 We honeymooned in Peter Island:: 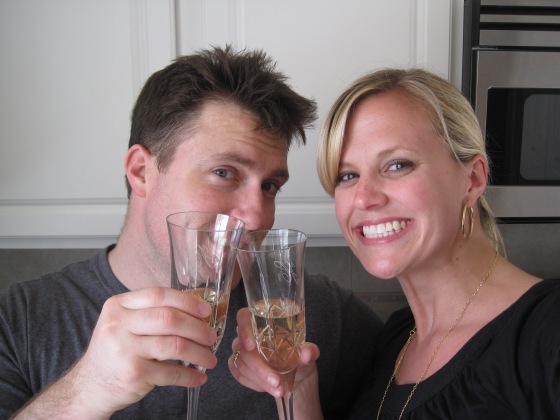 We made it through year #1 and returned to St. Augustine to celebrate::

We have spent many, many afternoons tailgating and cheering on the Dawgs and Tigers::

We’ve traveled near and far, but one of our favorites will always be Lake Tahoe::

We celebrated my brother’s engagement on the beaches of Costa Rica in April 2012::

And then we celebrated Craig’s 30th at his favorite spot in Nashville, The Stage, in October 2012::

And by Thanksgiving 2012, our puppy Coco was all grown up::

In May 2013, we celebrated my brother’s wedding and gained a sister to complete the Sims family::

We’ve gone so many places and done so many things, and I am ever so thankful for all the memories we have made together. Craig, I love you so so muches! You are my best friend, my rock, and my everything. I look forward to many, many more anniversaries and adventures with you by my side! Motown + Craiggers 4 Life!

Last week, we took a much-needed vacation with my parents to one of my most favorite places in the world — St. Augustine, FL. My mom’s family is from Jacksonville (Andrew and I were also born there) and we grew up visiting mom’s family’s beach house. I have so many fond memories of summers spent at the beach house with cousins and friends.  We have photos of me as a baby crawling along the beach EATING sand. Maybe that’s why I love the beach so much now.

We are lucky if we can make it once a year now with jobs and busy schedules, but when we do, it’s like Heaven. You can walk out of the house and right onto the almost completely empty beach. You can hear the waves crashing on the shore from the front 2 bedrooms. I always try to stay in one of those rooms because of that and the front row view of the beach. This house burned to the ground when I was very small, and my dad (along with a team of other people) re-built it — it’s now aptly named “The Phoenix.”

We brought Coco this time, and it was her very first trip to the beach. While at the lake last month, we found out the Coco does not under any circumstances like moving bodies of water. So walks on the beach near those big, crashing waves were not her idea of a good time. Any time we’d go near them, she’d pull as hard as she could (and she’s quite strong at 90lbs.) and sit down so she couldn’t be pulled near the water. We finally convinced her to check out the water when the tide went out in the afternoon. Then she was all about splashing and biting the water…  until tiny little waves rolled in, and she wanted nothing to do with them again. Who would think that such a big, “scary” looking dog would be terrified of moving water?

We took the opportunity to drive into Jax to visit my cousin Alli and her 3 kids, as well as my grandmother, Nana, for lunch one day. We haven’t seen them in 2 years since we last came down for our 1st wedding anniversary. It’s amazing how time goes by so quickly. I love getting to visit with Alli — I always thought she was so cool growing up, and she’s still pretty awesome now. 🙂 The kids were in full-on playtime mode when we got there, so Craig and I took turns admiring all of their toys and reading some books with them — Craig also got the brunt of some of Tripp’s karate moves. He’s such a good sport! 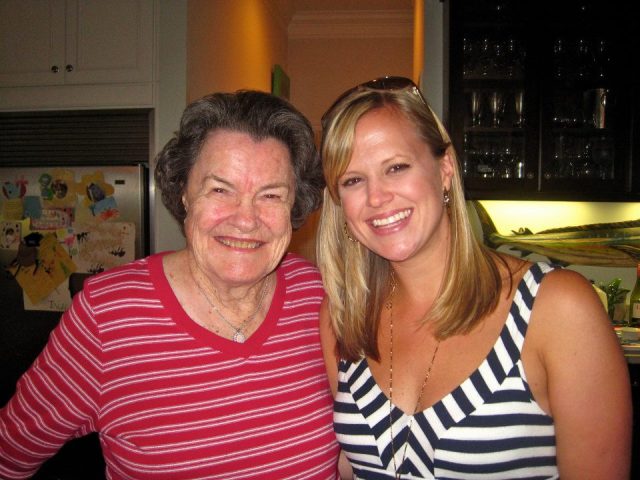 Craig, mom, and me after a yummy lunch at Alli’s::

Much of the rest of the trip was spent sitting on the beach listening to Jimmy Buffett tunes, eating out, and watching movies. 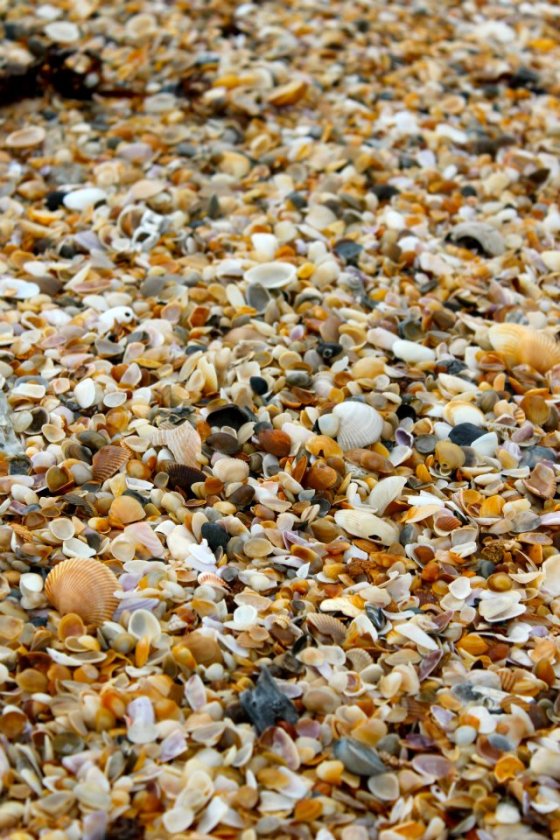 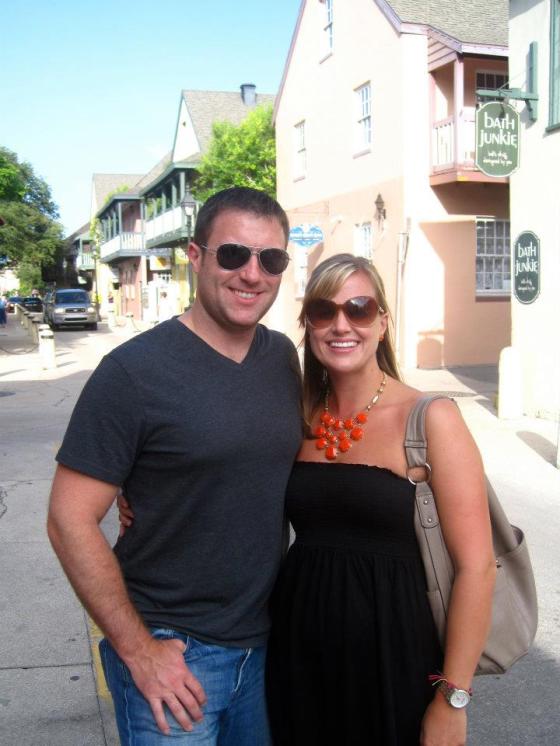 This is what Coco did most of the time since she couldn’t sit out on the beach without trying to eat every bit of sand in sight::